Hi, Dr. Liz here with Conversations for Effective Living, and today I’m going to talk about smoking cessation with hypnosis. Hypnosis is actually really effective at helping people to stop smoking. It’s even more effective than the patch and some of the drugs out there with no side effects. Sometimes the side effects from the commercials they list are truly scary. Suicidal is on one of them, and I was like, oh, my God, you can’t smoke, but you’re going to kill yourself? That’s awful. That’s an awful side effect.

Hypnosis has zero side effects. I just want to put that out there. But mainly I’m going to talk about what kind of assessment you do . . .  I do when a client comes in for smoking cessation, because people are really curious about this.

One of the things I’m assessing is what is their main representational system, meaning like is someone auditory? Are they visual? Are they more tactile, like touch? Is that really important to them, and then customizing the hypnosis to that system, so it’s most effective to them. The other thing I’m looking at is how do they use smoking? Are they using it as social, like it’s a social activity for them? Are they using it to feel better, so perhaps when they’re feeling down and depressed they go have a cigarette, and they feel better? Are they using more as a crutch? Is it, let me look at my list here, just part of their routine? That’s something, too. How much of a part of their routine is it?

I’m looking at that, and then I’m also looking at the physical addictiveness, like how addicted are they? Most people assume they’re either addicted or they’re not to cigarettes, and in actuality, there’s a whole range in there of how addicted somebody is. We’re looking at do you smoke very first thing in the morning, and that’s the first thing you think about, or is it more like, no, I only have a cigarette at the end of the day, or on my lunch break, or something like that. I have a whole questionnaire to assess how physically addicted they are, and then, again, we customize the hypnosis and the plan moving forward according to that, so it’s pretty customized to the client that’s coming in, very custom actually. 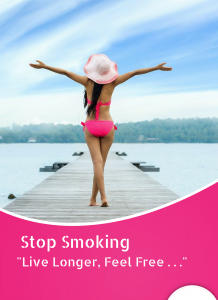 Then we also look at motivational factors. So what is going to motivate you to stop smoking? What’s more important to you than smoking? That becomes a big, big factor in the hypnosis that I’m doing.

That’s a little bit more about it. I hope you enjoy this video, and you feel more comfortable picking up the phone and calling a hypnotherapist. I hope you stop smoking wherever you are. I’m in Broward County, so if you want to see the information about coming into my office, it’s always on my website, DrLizHypnosis.com, and I hope you have a wonderful week.

If you would like the magic of custom hypnosis, email me at drliz@drlizhypnosis.com. If you’re local to Broward county or the Fort Lauderdale area, we’ll do it in person. If not, we’ll arrange an online appointment.